Western United FC is only in their third year of the A-Leagues Men’s competition and what an exciting third year it was, taking the championship as the total underdog in true westie fashion.

Dodo’s Delights were extremely fortunate to be selected this season as a partner of Western United, as part of their Top Corner promotion. When we entered the competition we didn’t expect the amazing show of support we received from our locals and our community. It was the voting power of our Dodo’s Delights family that secured us the partnership. The support really showed us how much love there is for local businesses in the west. It’s a great community that really gets behind its local enterprises.

That’s been the case with Western United as well. To sit at AAMI park at the Grand Final and see the northern stand just as full of green and black as the southern stand was full of Melbourne City’s baby blue was an incredible show of support for a new club. 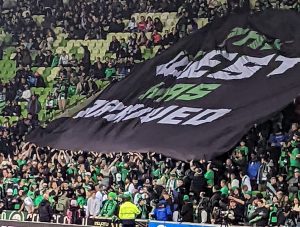 The West Has Risen!

The partnership has been a great opportunity to connect with Western United as they build a club for the western suburbs locals. Lee has been vicariously on the WUFC bandwagon since day one, when his husband signed up as a foundation member. It was an easy decision for him, he loves the sport and having a new club with a new home base just down the road is a no-brainer. Growing up as Western Bulldogs supporters made it easier to jump onto the next sporting club to represent the western suburbs.

This season, with the partnership between the club and the cafe, the opportunity to go to some games has been great but it’s also been a great way of spreading the word a little bit further about our little spot in WeFo. For Grand Final week we decorated the shop in the green and black of Western United FC, you might have noticed it on the shop and on our socials, and the response was great. We even went green and black with our beloved Smartie biscuits. Throughout that week, we were visited by so many Western United supporters, from all over Melbourne and even a supporter who flew down from Queensland for the championship game.

We can’t wait to see Western United build as a great force in the A-Leagues, as 2022 champions in the men’s competition and in the women’s competition as the club launch their women’s team in the 2023 season. It’s a very exciting time for football in the west and Dodo’s Delights was extremely grateful to be a part of it this season.

Making connections is such a huge part of what being a local cafe is all about. We love making connections with our customers day-to-day and having a chat while we make their coffee or their breakfast. But the connections with other local groups mean so much to a local community. It’s a big part of the plans for the next stage of Dodo’s Delights, now that we’ve settled in and look like getting a straight run at things. We already have a history with Footscray Baseball Club but there are so many great local groups in the west that we’re keen to connect with.

If you’re a part of a local community group of westies we’d love to hear from you about ways that we can work together. We’ve started big with our partnership with Western United but it’s the smaller groups, the grass-roots groups that are doing some amazing work and we’d love to hear all about it.